Rich folks work hard for their money, and if they’re not hard at earning it, at least they’re working hard to keep it in their pocket. I don’t fault them for being rich or hoarding their riches. Financially, that’s smart.

However, I am so tired of this trickle down effect mentality. That’s just plain stupid. Money does NOT trickle down to the poor. What? You’re crazy, Reena. Am I? People, did you not read the first paragraph? Okay… let me lay it out for you, plain and simple.

Rich people are great at staying rich. And the way to do that is not to spend money like it’s burning a hole in their pockets. That’s poor folks’ mentality. So… when rich folks get money, they invest it, sure… but they invest it in ways to make them more money… typically in transactions other rich folks have already invested in. As you can see from the economy, those transactions do not include making more jobs for those less fortunate.

So when I hear about more tax breaks for the rich because of the trickle down effect, I get rather irritated. Shit rolls down hill, people… not money. The term trickle up doesn’t make sense… so I’m not even going to try to explain that. However, I will say poor people throw money at the rich. Tax breaks for the poor and middle class work. The money will end up in the hands of the rich anyway. Why? Because unlike rich folks, poor people burn through money like their lives depends on it. They generally don’t invest it… no… they go out and buy the merchandise the rich folks are selling.

Think I’m wrong? Okay… I’m not trying to be mean or anything… just realistic. Do you consider yourself poor or not well-off? If you answered yes, I want you to think back to the last significant payoff you received. This is a relative amount. $50 is a big payout to some, $1000, $2000, $3000, a tax return might be a huge amount for others. So what did you do with that money? Did you invest it? Stick it in savings for emergencies (car breaking down, new heat pump). Or did you splurge? Did you head straight to Wallyworld and pickup a brand new TV?

You did? Guess where the profits go? To rich folks. That’s what I mean. Poor folks spend money. Poor folks put the money BACK into the economy. And when poor people are done spending their payouts, they’re right back where they started. 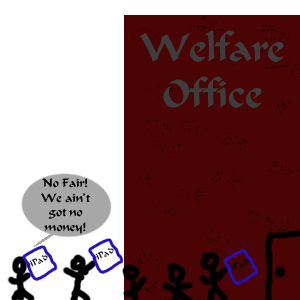 And in the end, the money is back in the hands of the rich people. But keep in mind, rich people invest in other rich people’s ventures… not into poor folks. As much as I’d like poor people to have money to spend, really… poor people have quite a few freebies — medicaid, earned income credit, lower taxes, educational grants and scholarships, food stamps or whatever they’re called these days. Heck… all poor people need to do is apply, and they have it made. If they don’t like their position in life, they can go to school at the government’s expense and earn a new position.

So next time folks start talking about the Trickle Down Effect… think for yourself. What do they really mean?

5 Responses to “The Trickle Down Effect explained by Yours Truly”